Arnold Samuelson, a young journalist of only 22 years old , determined and adventurous, embarked on a great journey through his country after finishing his university studies. He packed a couple of necessary things in his backpack, along with his violin, and sold a number of items to a local newspaper to help him set out on the journey. On his return to Minnesota, back in April 1934, he read for the first time a short story by Ernest Hemingway in the Cosmopolitan newspaper . The story in question was titled “A trip to the other side” , which later became part of his novel “Having and not having.” 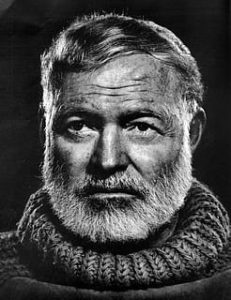 The young man was so impressed with the reading of the story that he had no choice but to hitchhike on a journey of more than 2,000 miles , just so he could see Hemingway and ask him for advice.

Arnold Samuelson did not have what is called a smooth and easy trip. He went from Florida to Key West by jumping from train to train and stopping at a dock to sleep in the open. The weather, he later recounted, was not exactly good. He also slept in the bull pen of a prison, which he says was infected with mosquitoes. Despite all this, nothing took away his determination and enthusiasm to meet the one who for the moment was his favorite writer, and willingly appeared at the door of his home. Samuelson relates it like this:

The writer asked him what exactly he wanted, to which the young writer replied that he had read his latest story published in Cosmopolitan and that he had been so impressed that he had not been able to avoid going to meet him to chat with him. Hemingway was busy at the time, but with a relaxed and cordial tone he invited him to come over to his house the next day.

The next day they began to chat and when Arnold Samuelson confessed that he did not know how to write fiction , that he had tried without success, Ernest began to advise him:

Ernest Hemingway, among other things, advised the boy against looking at contemporary writers . According to the great writer, it was necessary to compete with the classics, with the now deceased writers , who according to him were the ones who made their works resist the passage of time. The writer invited Arnold to his workshop. He describes his experience in it as follows:

Linkedin
Back to Top